Cute and stylish crafts, projects, and DIYs from a proud craft dork.

Hello friends. I thought I’d share this little tote bag I made awhile back. It’s actually a pretty easy and quick project, as long as you don’t take a year-long break in the middle of sewing it, like I did. Live and learn. Here’s the pattern I used, from Simplicity. The bottom of it actually spreads out and carries a fair amount of stuff and the two linings makes it strong enough to do that. Good pattern, good bag, enjoy! 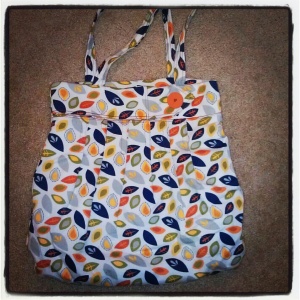 Here she is. The lining actually makes it super sturdy and can carry a lot of heavy stuff. 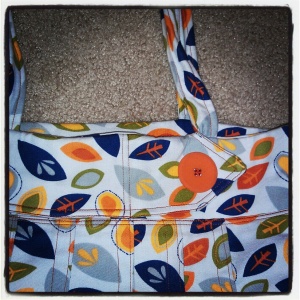 Close up of the top part. Don’t look too closely at the alignment of the stitching…

Another view. Pretty roomy at the bottom.

I cannot say how excited I was when I found these vintage Butterick patterns from 1960 and 1952. I think they’re actual patterns published in those years when they styles were undeniably far superior to now. And they were only 99 cents! Whatttt?! I got this from ’60 and this one from ’52 and am SO pumped to make a vintage dress! I’m just obsessed with this style and it seems so hard to find but hopefully not too hard to make. Not to mention how fun it will be to pick fabric. Ok so I posted it, now you have to hold me to it. 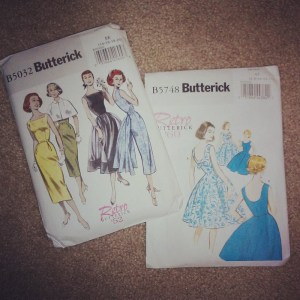 Whoops, it’s been awhile! Don’t worry, I wasn’t not crafting, just failing at it. I don’t know about you but most Christmases I get myself in way over my head with some elaborate project and end up holed away at 3 am on Christmas Day trying to finish something that the fun wore out of weeks ago. So why wouldn’t I go for it again this year?! Long story short, I decided to knit my brother-in-law socks and even started in November and gave myself deadlines. However, when it came down to crunch time I realized I had fatally flawed the first sock so…I scrapped it all and enjoyed my Christmas instead! I will make those socks though, if it kills me.

Onto what I actually did make! I got a sewing machine for my birthday a year ago (ahem…feel free to post birthday wishes) so right on time, I decided it was time to make a cover for the thing. I felt bad for it gathering dust all year. For some reason I had the fabric in my head immediately so that was the easy part. It was surprising difficult to find a simple, non-cheesy pattern though and I felt I shouldn’t wing it. I used this pattern from McCall’s, minus the horrifying cat motif. It only took like a half yard of fabric and some cord to line the ends. An easy afternoon project and another way to keep dust off the sewing machine (other than actually using it…get it?)

Front view. It looks a little lumpy because of the machine underneath…and the lumpiness of the cover. Good excuse.